Crowded Households in Dublin – and Where They Are – Mapped

Adverts offering to rent out beds in hallways, bunkbeds packed into rooms, or even a mattress atop a wardrobe – some are having to stuff themselves pretty tightly into homes in Dublin these days.

But a detailed breakdown for County Dublin shows how the more-crowded households are squeezed into some neighbourhoods, while residents in others have more room to themselves.

The Central Statistics Office uses a simple ratio as a measure of overcrowding in the country’s households: it looks at where there are more people than rooms.

Electoral divisions within the north inner city dominate the list of neighbourhoods with more than one person per room.

A couple of electoral divisions in Blanchardstown, and one each in Cherry Orchard, Clondalkin, Tallaght, and Priorswood round off the top-ten list. 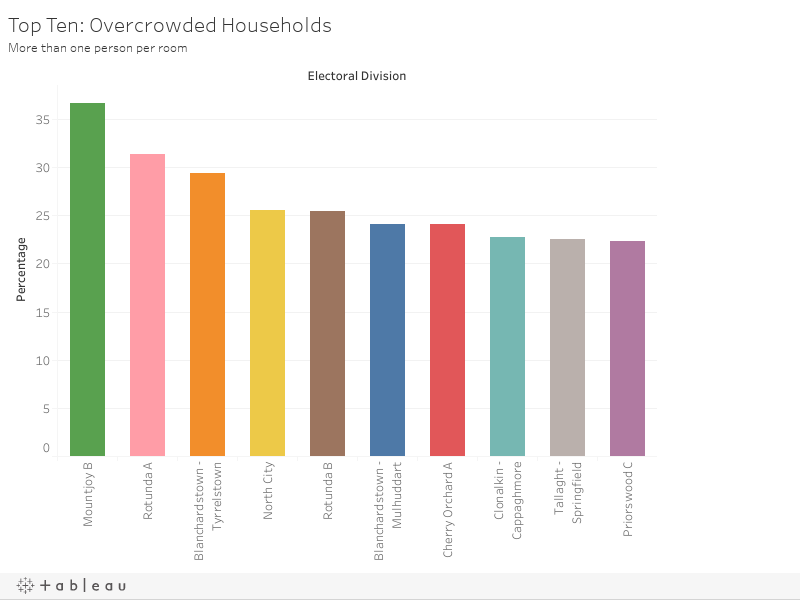 The census also collects data on the percentage of households with more than 2.5 people per room – which might be called acute overcrowding.

Also featuring in the acutely overcrowded list were neighbourhoods in the Liberties, where 3 percent of households in both Merchant Quay B and Ushers B have more than 2.5 people per room. 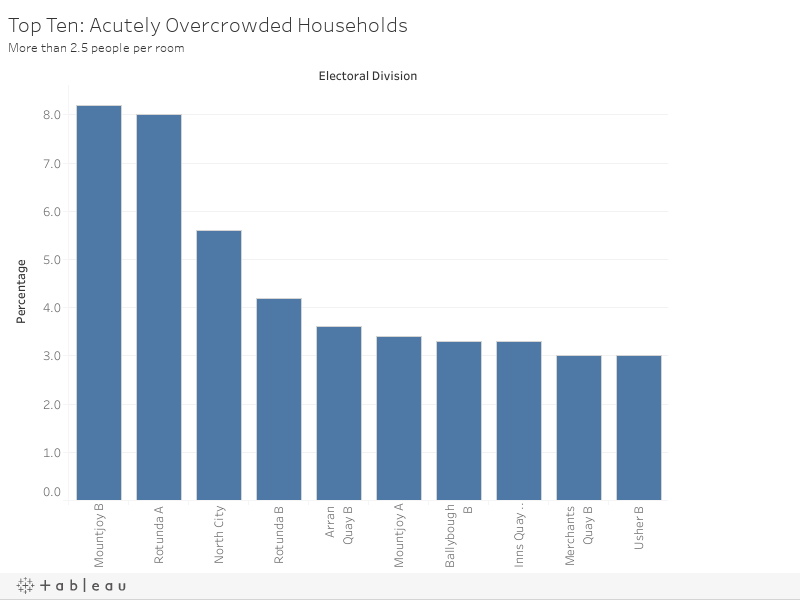 Dublin City Council has set up a hotline for tenants in the private sector to report overcrowded homes, or substandard conditions. (It’s unclear how many people have reached out so far. The council’s press office didn’t respond to a query about that.)

At the moment, under the Housing Act 1966, a property is considered overcrowded under a couple of circumstances.

Firstly, if the number of people who sleep in the home, and the number of rooms inside, are such that any two people older than 10 years and of the opposite sex, and unmarried, must sleep in the same room, then that home is overcrowded.

Or, if there’s less than 400 cubic feet of air per person, then that home is overcrowded.

The local authority can prescribe how many people can live somewhere without it qualifying as overcrowded and give the home-owner 21 days to comply, said a spokesperson for the Department of Housing. “Any person who neglects or refuses to comply with these requirements is guilty of an offence.”

But while the council is reacting to reports, there are challenges in how to respond in some cases, says Sinn Féin Councillor Daithí Doolan, who is also head of the council’s housing committee.

The legislation around overcrowded properties is outdated, and punishments are light, Doolan said. “We need more robust central-government legislation to assist us.”

But What Is Overcrowded?

John-Mark McCafferty, the chief executive officer of Threshold, says that housing charity has been pushing for a new definition of overcrowding – and stronger penalties for landlords who put tenants in jeopardy.

But it’s a tricky thing to define. “If you look at various ways of defining this across different jurisdictions” – say, the World Health Organization (WHO) or Eurostat – “they use quite different definitions”, he said.

Eurostat has references to different ages and genders. Meanwhile, the WHO has broader parameters that include minimum privacy, separation of rooms, and ages.

Once you start to be prescriptive, you risk ruling things out and creating unintended barriers to families staying in their homes, said McCafferty.

The United Kingdom’s definition – on which a Fianna Fáil bill is based – includes a room standard and a space standard. “Through all of this there is sort of value and moral judgment calls made,” McCafferty said.

For example, under some definitions, a home is deemed to be overcrowded if you have two people between 12 and 17 of the opposite sex, brother and sister say, sharing the room together. “While it might not be ideal, I’m sure there are a lot of people who live in owner-occupation who have that situation,” he said.

Also, “you’ve got cultural considerations here”, he said. Some minority groups might find that prescriptive definitions are not appropriate for them.

“This really needs deeper, further consideration, like some kind of working group,” he said.

The government needs to consider definitions “in a non-rushed way, that doesn’t lead to all sorts of unintended consequences for the kind of people, I think, it’s intended to protect”, said McCafferty.

Eoin Ó Broin TD, the Sinn Féin spokesperson on housing, said the definition needs to be hashed out through the Oireachtas process. That way, TDs can bring in experts, look at the evidence.

Any definition should be used by both the CSO for collecting data, and in the housing regulations, he said – and launch off from the the minimum requirements for healthy and safe places to live. “There’s a fair bit of science to that,” he said.

Research in some areas might be thinner than others, according to a Threshold briefing note on overcrowding. Effects on physical health are hard to determine, given confounding factors like poverty, it says. There’s more evidence around mental-health impacts, though.

Also, psychological responses to density – the feeling of being in an overcrowded place – may change over time in societies, as expectations and norms change. Or, the same person might have different responses, and expectations of privacy, at different ages, said the note.

Part of the problem of is that families and tenants are not just squeezed into homes in the private-rental sector, but also in social housing.

That could lead to “a fair degree of nervousness in government”, says Ó Broin. “Their first problem is, how are they going to meet that in terms of local-authority tenants?”

In the Dublin City Council area, there were 1,118 households in 2017 listed as in need of social housing because they were living in overcrowded accommodation.

The Impact of Enforcement

It’s hard to see how most of the 6,746 households in County Dublin with more than 2.5 people per room would not be overcrowded by the current definition, or possible future definitions. (Unless, perhaps, these households consist of one adult and many children.)

Would landlords be asked to evict some of these tenants, under current or future legislation? Should they be? (Daft.ie on 2 March listed 12 apartments to rent for less than €1,000 a month in Dublin city.)

Ó Broin of Sinn Féin says that if the government were to come up with a new definition of overcrowding and new penalties, the next thing to consider would be how to enforce those.

That would mean looking at a possible lead-in time for landlords to comply, with targets to meet along the way, he said. As it has done for inspections of properties in the private-rented sector.

“If x percent of private-rental properties, and x percent of council properties don’t meet these standards, then clearly there needs to be a plan for introducing a phasing in,” he said. One idea might be for staggered interim standards.

A spokesperson for the Department of Housing said it is looking at possible amendments to the laws around overcrowding this year “as part of the Residential Tenancies Board’s change-management plan, and introducing further legislative changes if deemed appropriate”.

[UPDATED on 7 March at 16.40: This article was updated to clarify one of the strands of overcrowding definitions.]

Lois Kapila: Lois Kapila is Dublin Inquirer's editor and general assignment reporter. She covers housing and land, too. Want to share a comment or a tip? You can reach her at [email protected]

While you write ” For example, a home is deemed to be overcrowded if you have two people between 12 and 17 of the opposite sex, brother and sister say, sharing the room together”

While the Bill says “children 5 years or older of the opposite sex should not share a
bedroom” big difference is not worth point that out in the text of the article.

The problem here is that much of the overcrowding occurs in situations where the tenants are foreign students, here to learn English and renting from unscrupulous landlords. There are no records kept. Rent is collected in cash, tenant’s details are not included in the Census figures. Neither are they registered with the Residential Tenancies Board. Some landlords let to an “agent/ tenant” who then sublets to large numbers of foreign students, with the full knowledge of the landlord. So the report, while welcome, only shows part of the picture.

What Should Be Done with the Iveagh Markets?

Lois: Centra and Three.ie Are Supporting "Snuff Journalism", Even If Unintentionally

You can read 3 more free articles this month. If you’re a subscriber, log in.

The work we do isn't possible without our subscribers. We're a reader-funded cooperative. We are not funded or influenced by advertising. For as little as the price of a pint every month, you can support local journalism in your city.